Microsoft 365 Defender vs. Other Security Services

Businesses are increasingly challenged trying to find out if having Microsoft Defender is enough security to keep their employees, data and bottom line protected for evolving security threats. In 2021, a reported 250,000 Microsoft servers were targeted by hackers, some of these servers belonging to 30,000 organizations in the United States. 67% of IT leaders have reported an increase in data breaches due to remote work. With that number expected to grow in 2022, Microsoft is updating its security products to help better protect endpoints. That said, even with these planned updates to Microsoft Defender blind spots remain that require other security services for full protection.

What is Microsoft Defender?

With the release of Windows 8, protection against viruses was added, resembling Microsoft Security Essentials (MSE), using the same anti-malware engine and virus definitions. In Windows 10, while usually available in the settings app, Microsoft Defender settings moved to the Windows Defender Security Center. Microsoft also released a feature in the anniversary release of Windows 10 where users would receive a pop-up notification after a scan reflecting the findings even if no viruses were found.

Here at Centre, we offer a robust program for businesses that run Microsoft 365 with us. It is secure by default because we automatically include the protections that programs pre-installed with Microsoft, like Microsoft Defender, don't have.

For detailed information on the licenses that contain Microsoft Defender for Endpoint, you can get in touch with Centre's Microsoft cloud and security consultants.

Developed to help protect organizations against sophisticated attacks like phishing and zero-day malware, Microsoft Defender for Office 365 correlates signals from a broad range of data to help identify, prioritize, and provide recommendations on how to address potential threats.

Microsoft Defender for Office 365 Plan 2 includes all of the above Plan 1 capabilities, PLUS:

Microsoft Defender for Office 365 is largely used to prevent broad, volume-based, known attacks but is only available exclusively for certain licenses. For more information on what these licenses are, contact one of our IT Consultants here.

Microsoft Defender for Cloud Apps is a Cloud Access Security Broker (CASB) that operates on multiple clouds. Previously known as Microsoft Cloud App Security, this solution is built to provide comprehensive security and compliance in order to enable users in any organization, located both locally and remote, to adopt business applications without compromising efficiency.

Because Microsoft Defender for Cloud Apps is a security tool, it doesn't require Office 365 productivity suite licenses. However, there are certain prerequisites that need to be met in order to set it up. While an organization or business could attempt to set this up themselves, it's best to utilize an MSP to speed up the setup process with accuracy.

Microsoft 365 Defender is an extended detection and response (XDR) response solution. XDR solutions provide protection from a wide range of threats that could come in contact with your endpoints, network, users, and cloud workloads. This is done by providing continuous and automated monitoring, analysis, detection, and remediation.

Because the threat landscape is increasing in sophistication and complication, XDR presents a new, advanced approach in order to deliver security that is built to withstand the ever-evolving threats of today. To learn more about this solution and how to activate it for your business, contact our IT Consultants here.

Each Microsoft Defender Service is built to provide businesses with security measures and controls that are best suited for them. It's the reason why not all protections and preventative measures are included with every license. Taking a look at the table below, you can see that only XDR offers every capability.

To determine which license your business would benefit from the most, our IT Consultants, who are well-versed in Microsoft Defender solutions, can help you figure out the best solution for your business or organization. 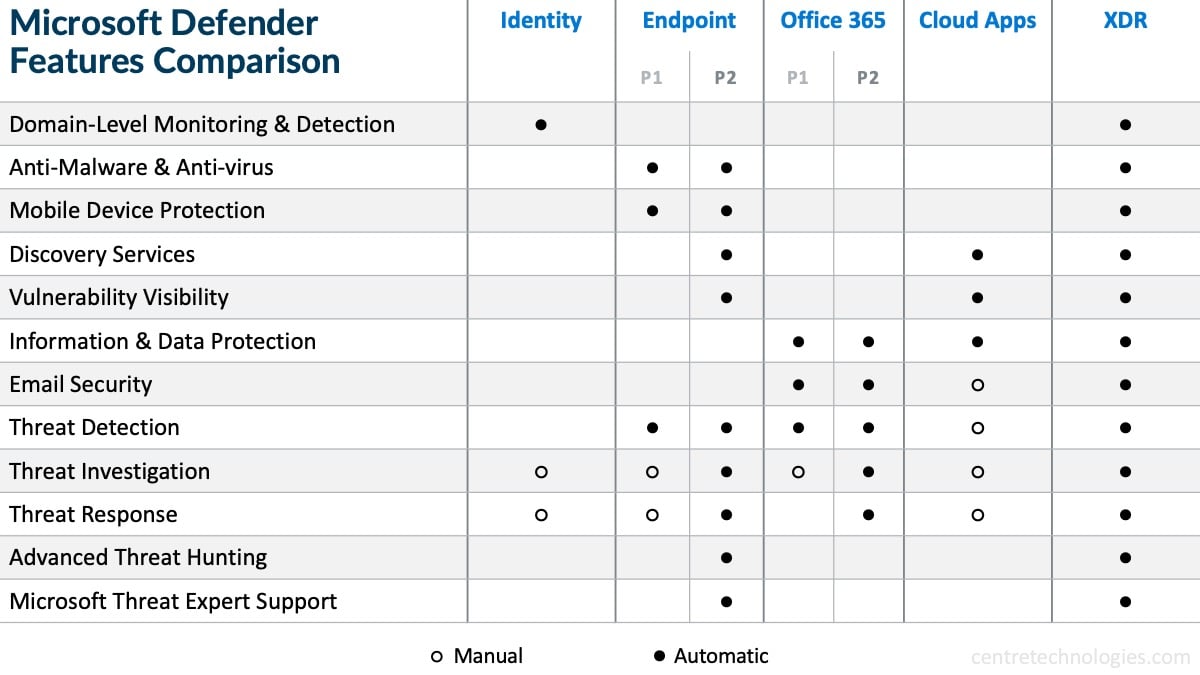 As remote work is popularized and hybrid work environments persist, threats continue to transform and advance. Microsoft Defender has included threat and vulnerability management made to help recognize threats, such as the recent Log4j vulnerability, hiding in applications and components.

By identifying, assessing, and remediating endpoint weaknesses, the threat and vulnerability management enhancement to Microsoft Defender reduces risk for businesses and organizations.

The Internet of Things (IoT) Device Discovery and Integration has the ability to help you find unmanaged IoT devices connected to corporate network(s). It also gives a single, unified view of IoT inventory alongside the rest of an organization's IT devices (workstations, servers, and mobile).

By enhancing device discovery with the agent-less monitoring capabilities provided by Microsoft Defender for IoT, businesses can increase visibility to help locate, identify, and secure the IoT devices in the network.

Many people are surprised when the same IT environment that they've invested time and money to secure ends up attacked. The truth is, there are blind spots both known and unknown that can make it fairly easy for hackers to make an entrance and wreak havoc. An object is only as strong as its weakest point, and the same goes for an IT environment.

Unpatched systems, phishing, ransomware, encryption issues, and more are just a few of the most common blind spots in a supposedly "secure" IT environment. It's these very blindspots that cause businesses millions of dollars and contribute to the foreseen estimate that cyber crime will cost the world $10.5 trillion by 2025.

In order to house a fully secure environment, ready to face the threats of today and tomorrow- businesses need to utilize a robust program. Unfortunately, Microsoft Defender XDR, with as much as it offers, isn't enough by itself. Using an MSP like Centre will help to cover the blind spots that are notorious for being open doors for cyber threats.

It is impossible to predict when they will be exposed and when bad actors will choose to take advantage of them. Managed Vulnerability Scanning (MVS) is the best method to prevent vulnerabilities such as Log4j from negatively impacting your business.

Vulnerability management service (MVS) is a service that evaluates the public-facing infrastructure of a business regularly to identify exploitable vulnerabilities and reduce the window of exploitation for attackers.

While Microsoft Defender offers XDR, but this does not cover a business's entire IT environment. It is only half of an entire solution. Hence, why it can still leave a business vulnerable to threats.

When utilizing EDR with Security Operations Center-as-a-Service (SOCaaS) services with Centre Technologies, businesses get full protection via threat monitoring, data analyzing, threat pattern identification,  and immediate response to threats. Not only do businesses get to experience effective detection and automatic containment of endpoints, but in doing so, they can prevent ransomware attempts such as the highly publicized Colonial Pipeline cyber attack.

From workstations and devices to cloud apps and on-premise servers, a reliable cloud backup and disaster recovery program makes all the difference in how efficiently an organization is able to operate.

As a result of the new features and enhancements in Microsoft Defender, businesses are able to be more secure, productive, and efficient. Get in touch with Centre Technologies today to book a guided tour of Microsoft 365 with security enhancements.

How to take full advantage of Office 365 security features

So you've successfully moved to Office 365 — now what? One of the first things Centre Microsoft experts recommend doing once ...
Read More

Easy Collaboration at your Fingertips The new RingCentral for Microsoft Teams, delivered and supported by Centre Technologies, ...
Read More

Spending More and More Money with Microsoft? Here's How to Get the Most Out of It

Choosing the right collaboration tools is a key factor in enabling better communication among your employees, which can ...
Read More